Fine Homebuilding Magazine’s recent article, “Home Buyers Love Splurges in the Kitchen,” suggested that homeowners invest in high quality kitchen finishes before putting their home on the market. The kitchen has long been known as the heart of the home, and this sentiment is true whether your house is going on the market or will be kept in the family for years to come. M. Teixeira’s DIY Soapstone Countertop was used in Fine Homebuilding Magazine’s ProHOME kitchen for its durability and elegance. The kitchen featured is a mix between modern and traditional, which showcases soapstone’s ability to flawlessly blend with and accentuate any design aesthetic. 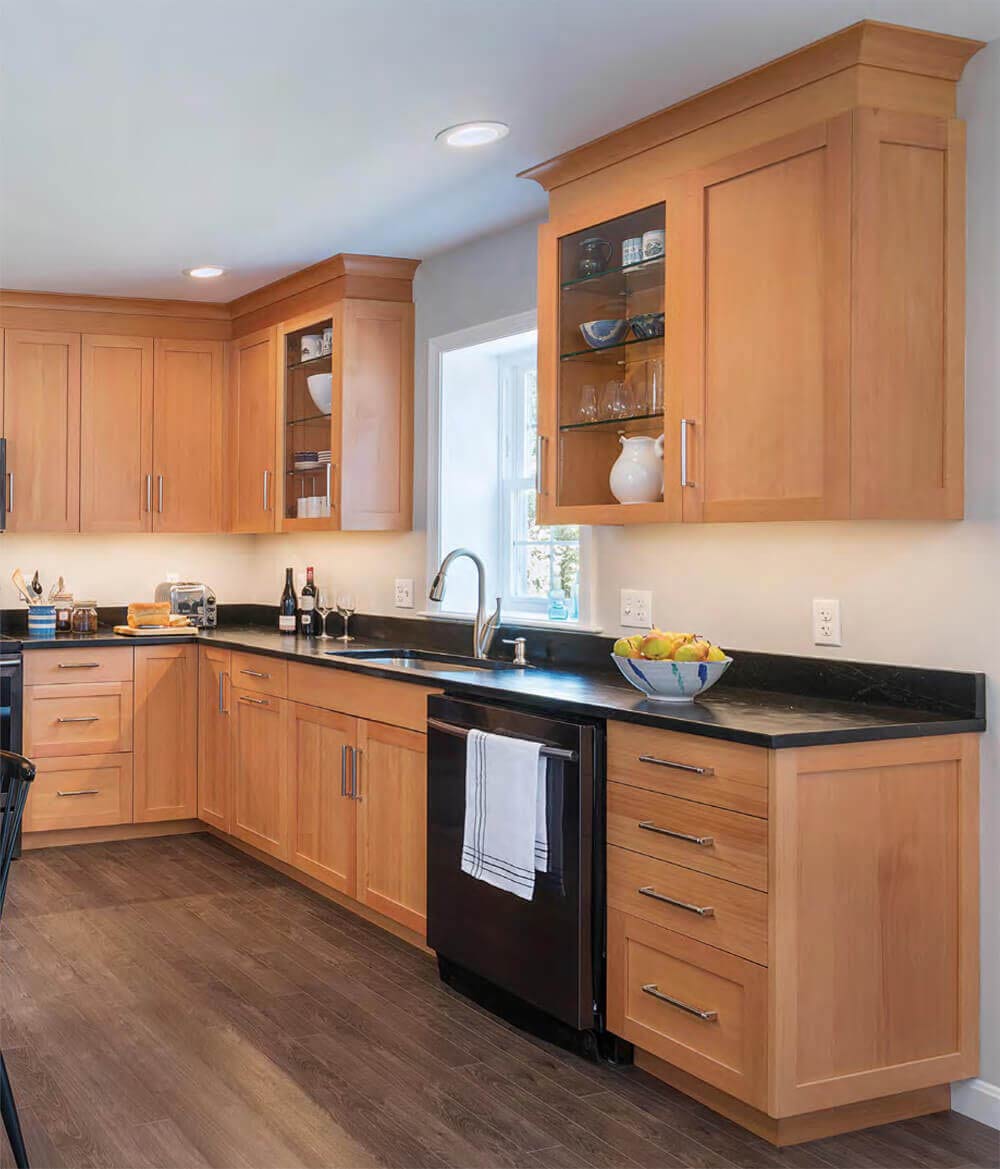 Some homeowners shy away from natural stones because they believe the cost isn’t within their budget. Soapstone is an affordable option, but can be even more affordable if you use M. Teixeira’s DIY Soapstone Countertop kits. More than half of the cost of soapstone counters comes from labor, which makes our DIY kits a smart choice for pennywise homeowners.

M. Teixeira’s DIY Soapstone Countertop selection ranges from complete DIY to fully fabricated, so no matter your skill set or tool collection, you can save money on renovating your kitchen, outdoor area, or bathroom counters. For those who may second guess their ability to tackle this project, we’ll even give you a practice piece to try before you commit to the full kit. Take a look at M. Teixeira’s DIY options today to get started on building the natural soapstone countertop you’ve always wanted! 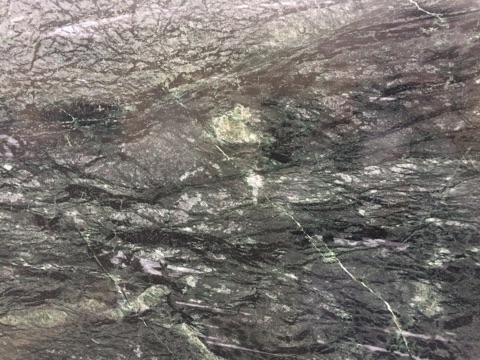 We just received a new shipment of Belvedere Soapstone slabs in our Washington Metro Virginia location.  Come visit our showroom and soapstone slab yard to get the best selection.

Stormy Black Soapstone is a very tradition soapstone. Once treated with mineral oil the stone darkens and the beautiful veining shines through. Check out Roger Teixeira’s video describing this beautiful stone.

Belvedere Soapstone is very unique and if often chosen for contemporary applications. 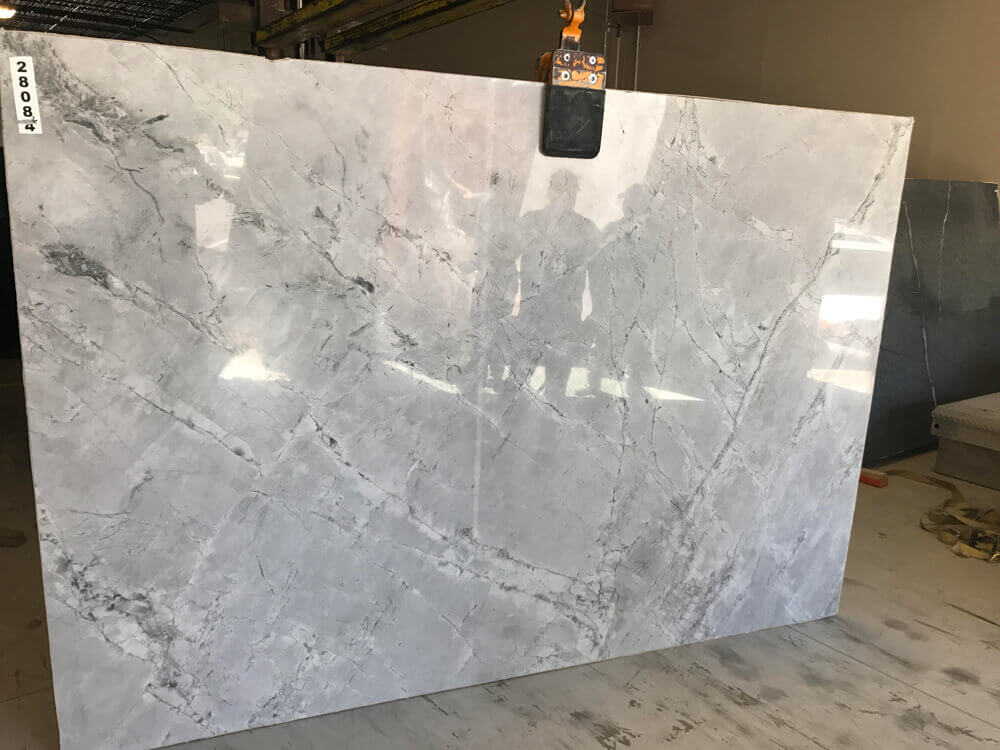 We just received a new shipment of Belvedere Soapstone slabs in our Denver Colorado location. Come visit our showroom and soapstone slab yard to get the best selection.

Belvedere Soapstone is very unique and if often chosen for contemporary applications.

Super White Quartzite has that classic look of Marble, but is more durable and easier to maintain. 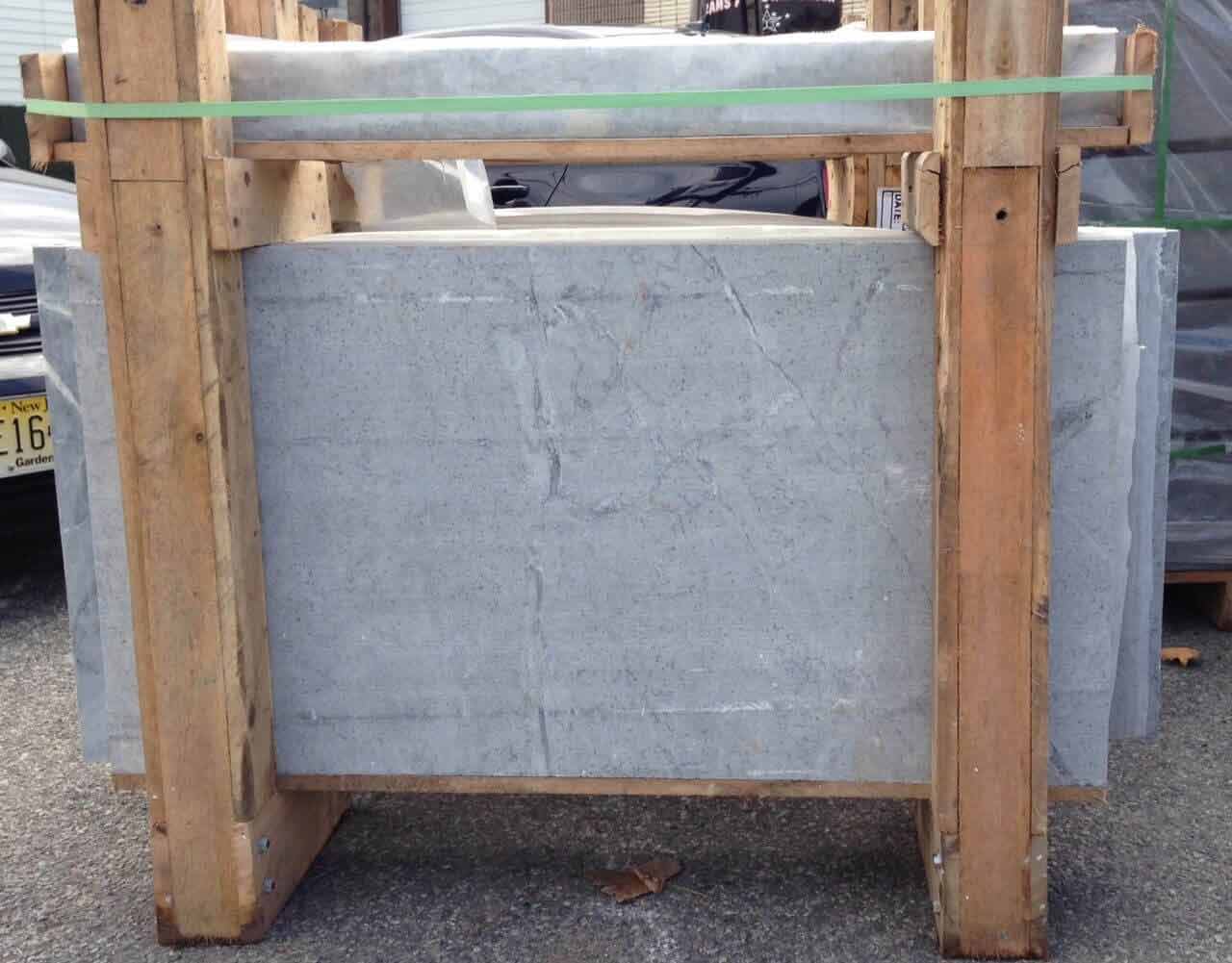 The kitchen is the heart and soul of the home, but many homeowners hesitate to update their kitchen due to excessive cost. A good renovation costs thousands of dollars, making it difficult to bite the bullet and spruce up your home. At M. Teixeira Soapstone, we’re proud to offer a smart solution to this problem: Our Kitchen-to-Go Soapstone Counter Kit. While soapstone is famously impervious to stains, chemicals, acids, and general wear-and-tear, it is also soft enough that the average handy homeowner has all the tools needed to fabricate a stunning soapstone countertop.

Soapstone is an ideal material for the kitchen because it does not require sealing, it will not stain, and it has heat-resistant qualities. Most people are surprised to learn it is more dense than marble, slate, limestone, and even granite. Withstanding the test of time, soapstone is still widely used in chemistry lab countertops and acid rooms. It’s remarkable durability is perfect for a high-trafficked and well-used kitchen that will stay beautiful for years to come.

Fabricated With Ease by Handy Homeowners

With more than half the cost of natural stone counters going towards labor, it’s an easy decision for DIY-ers to incorporate beautiful stone countertops at a fraction of the price. Instead of needing specialized stoneworking tools, all you need is a circular saw, a jigsaw, a drill/driver, a grinder, and a sander.

Recently, homeowners Matt and Laura reached out to report their success with our DIY kit and soapstone sink. When emailing to let us know how much they love their soapstone kitchen, they wanted us to share this message:

“I have never worked with stone countertops before and I want your customers to know how easy soapstone is to work with. I was very nervous to take on this project, but it was not technically difficult and the end result exceeded my expectations.”

Interested but unsure if you have what it takes to DIY your kitchen? For homeowners who doubt their ability to complete this project, we offer a no-cost “practice piece” for you to test your skills before committing to the full project.

Our DIY kit has 4 options so you can choose just how involved you would like to be in the fabrication of your countertops: Complete DIY, Cut-to-Size, Cut-to-Size and Finished Edge, and Full Pre-Fabricated.

M. Teixeira Soapstone is eager to help you save on building the kitchen of your dreams. Matt and Laura wrote, “We are really happy to have found M. Teixeira Soapstone and greatly appreciate your assistance with filling our order, holding the material for us, and the care your warehouse guys took while loading and securing the stone in our vehicle the day we picked it up.”

We’re passionate about this resilient and attractive natural stone. Get started on the renovation you’ve always dreamed of and order your sample package today!

The kitchen is the focal point and heart of any home, where functionality and aesthetics come together to embody your personal taste and style. Release your inner designer with our easy-to-use Kitchen Visualizer. Whether you have a small or large kitchen, designing a new kitchen can be overwhelming, but this new tool will help you take the guesswork out of the design process and your new kitchen plan.

From Inspiration to Reality

When you first make the choice to upgrade or remodel your kitchen, you probably begin your search for inspiration. You bookmark blog posts and kitchen galleries or save magazine clippings of kitchen pictures. Perhaps you have a friend or relative who recently remodeled their kitchen and you find yourself imagining it in your home. At a certain point throughout this process, you have ideas of your favorite kitchen design ideas, and then you hit an inspiration roadblock. You like the wall color in one image, the counters in another…

Bring Your Kitchen Design Elements Together

M. Teixeira’s new Kitchen Visualizer is here to help! Bring your favorite design elements together in one easy place. With a few clicks, our easy online tool lets you build your dream custom kitchen with soapstone countertops and backsplash. Don’t give in to the roadblock, use our interactive guide to help you visualize the kitchen of your dreams! 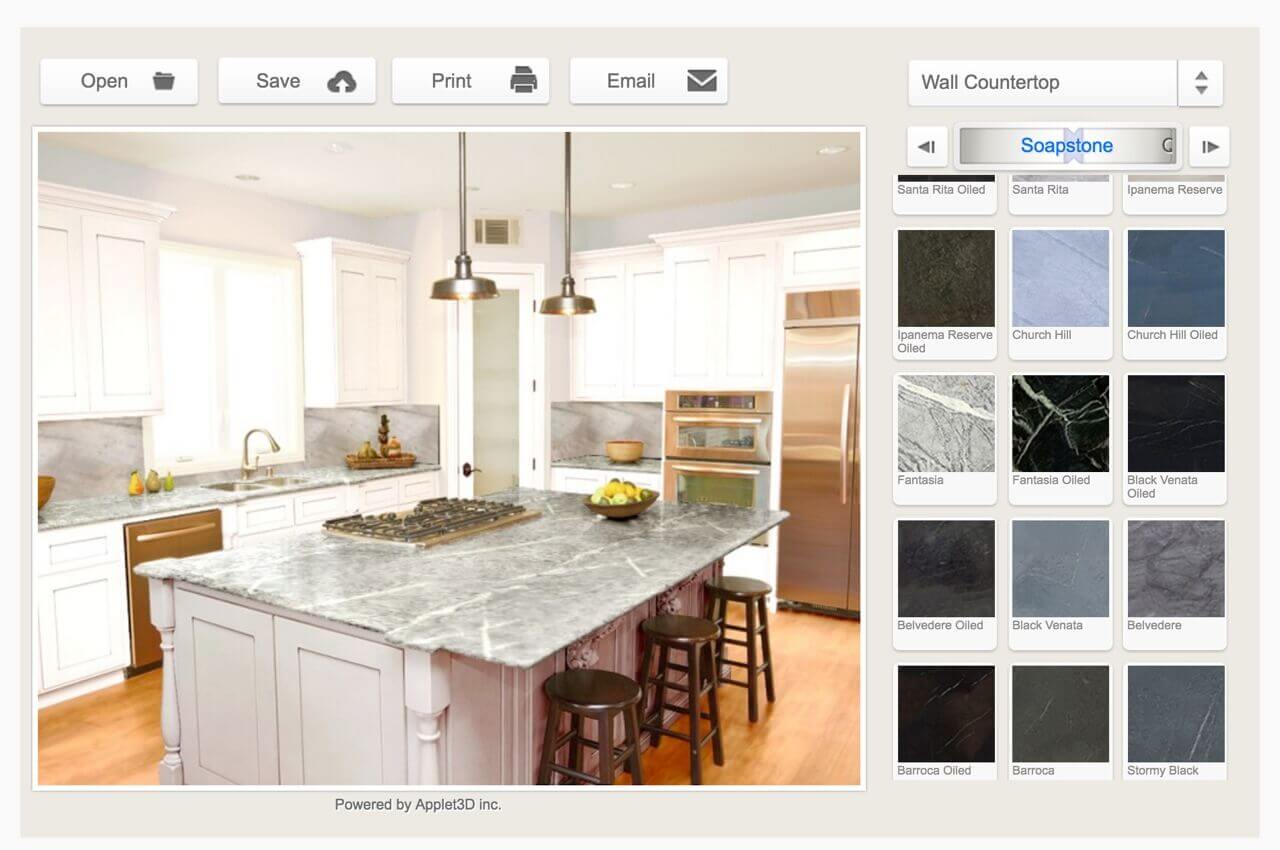 Easy to Use Features

This great new web tool allows you to quickly and easily choose your favorite kitchen design elements in one place. Our visualizer also allows you to print, email, or save your designs.

Choose from a variety of applications, such as:

Our Kitchen Visualizer is right at your fingertips to help you create the kitchen of your dreams – get started today!

Justin of Bridgewater, NJ recently reached out to let us know how beautiful his newly remodeled kitchen looks with our affordable DIY Soapstone Slabs. Justin touted the project as a unique aspect of his remodel and only requiring a little patience, diamond blades and routers, and a few strong friends to help lift the slabs. He also managed to complete the whole countertop installation with only one small seam, barely visible behind the sink.

Justin’s kitchen is a prime example of achieving your dream kitchen for just a fraction of the cost. Fabricating and installing your own soapstone slabs is an incredibly affordable way to produce a high-end, tasteful result on a tight budget. We love to see these success stories; if you have one to share please email us at info@soapstones.com!

BIG Savings. With our Kitchen-to-Go Kit.

Our Kitchen-to-Go Kit is ideal for the handy homeowner who would like a beautiful soapstone kitchen countertop at a considerable saving.

Unlike granite, soapstone is soft enough that it doesn’t require special tools for fabrication. All you need is a circular saw, a jigsaw, a drill/driver, a grinder, and a sander, making your kitchen soapstone countertop an inexpensive DIY project.

For pricing and kit details, visit our store.

About the Hardness of Soapstone 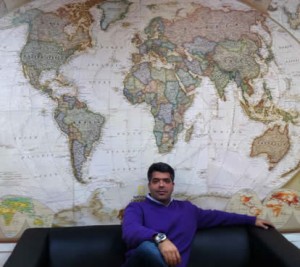 There are a lot of questions, rumors, myths and misinformation out there about the hardness of soapstone. I will try to put in simple terms, some facts on this subject:

Soapstone is naturally a softer stone, since it is made up mostly by Talc, among other minerals. What makes soapstone softer or harder, is basically how much Talc is in it.

Average architectural grade soapstone , used for countertops, wood burning stoves , sinks, tiles, etc. will have around 50% of Talc, the harder ones, perhaps only 30%. Soapstone that is used for carvings, and the art industry will usually have around 80% of Talc.

Some of these really hard stones out there, have no Talc in them and in petrological terms cannot be called a soapstone, they are serpentinites. A serpentinite is what soapstone used to be, a metamorphism of serpentinite became soapstone. Basically if a “soapstone” is so hard that it cannot be scratched by a knife, chances are it is not soapstone, it is a serpentinite. What does that mean? Well as an example, one cannot use serpentinite in an application to deal with extreme heat, because it does not have the thermal properties that soapstone does. In a kitchen environment, serpentinite will probably work just fine.

I have heard terms like “the new generation” of soapstone being harder, which I get a kick out of. In geological terms, these serpentinites are actually the “old generation”, since the harder serpentintite metamorphised into soapstone, which is softer.

About the Moh’s Hardness Scale

Although the Moh’s scale was created with and classified using 10 basic minerals, not rocks or stones (which are not minerals) it actually can be used as a guideline to determine hardness of all materials, including stones.

With that being said, if we take something that we already know it’s hardness and try to scratch a soapstone, and it does, we will know that the soapstone is at least softer than what scratched it. So if a fingernail scratches it, it can be assumed that, that soapstone is a 2.5 or less on the Moh’s scale of hardness.

If knowing the Moh’s value of a giving material is important to you, you can actually figure this out by yourself by trying to scratch it with the following materials of already known hardness:

fingernail = 2.5
a copper penny = 3.5
knife blade = 5.5 (Anything harder than this, is definitly a serpentinite and not a soapstone).

What happens if you get your soapstone scratched? While most scratches will occur if one purposely tries to scratch their stone, if you get a scratch, the beauty of soapstone is that you can easily sand it off, with a regular sandpaper or even just a dab of mineral oil or soapstone wax will hide it.

M. Teixeira Soapstone ships to Europe and the UK.